I Am the Foraged Mushrooms

I am the foraged mushrooms. A friend of mine described his recent state of mind with these words. This wonderful image describes one element of himself, one ingredient of a gourmet dish. He could have told me hours of stories about his last few weeks and it would not have Read more…

Peak performance is about paradox. Be intense and stay relaxed at the same time. Play with bravado and humility simultaneously. Be fully trained nearly beyond the bounds of health – and fully rested too. The bigger picture of peak performance is the same. When we commit to big goals, we Read more… 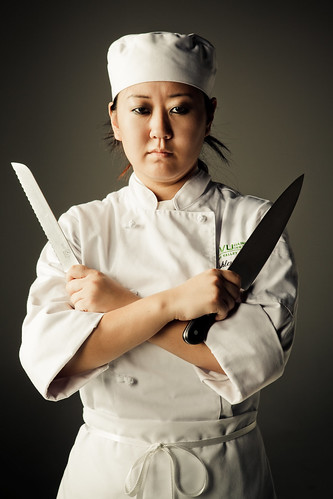 TV addicts are all a flutter over the drama on Gordon Ramsay’s Kitchen Nightmares. For the first time, the restaurateurs he was trying to help were so offensive and stubborn that he begged off. It’s typical for Ramsay to bump up against major resistance from restaurant owners confronted with the glaring weaknesses of their business. Generally they see the light and at least give Ramsay’s suggestions a try. In this case, Amy and Samy Bouzaglo of Amy’s Baking Company in Scottsdale, Arizone dug their heels in against any critique. Amy melted down repeatedly at the slightest stress and lashed out at team members wading their way through the emotional minefield she and Samy created. Both Amy and Samy were abusive to customers to a level bordering on assault. Ramsay walked away. Major trainwreck. Major internet sensation. Major fail for their business.

I don’t watch much TV anymore. I don’t have a cable subscription, but I love watching cooking documentaries (like El Bulli or Kings of Pastry) or vegging out with the occasional episode of Cake Boss or Chopped.

I’ve learned a lot of things from watching cooking shows, like the inevitability of dirty icing and fondant when making elaborate cakes. More importantly, I’ve learned about the restaurant kitchen tradition of acknowledging orders or feedback with a “Yes Chef” or “No chef.” It’s about letting the boss know you listened. It’s about pacing and information flow and learning and, yes, power structure.

On Kitchen Nightmare, Gordon Ramsay was Samy and Amy’s boss. They brought him in to fix their problems. Their business had been going off the rails, and rather than answering “Yes Chef” when customers had feedback, they labeled them haters or trolls, insulted them and threw them out of the restaurant. They pushed away the people with the most power to transform their business. Then they did the same to Ramsay, who was met with the same lack of “Yes Chef” spirit. It’s no surprise they learned nothing.

I’m finding “Yes Chef” to be an incredible tool in expanding my own skills.
END_OF_DOCUMENT_TOKEN_TO_BE_REPLACED

Training vs. Working Out

Stacey Richardson makes an awesome distinction in her new article It’s Not About The Workouts. Working out isn’t enough. The journey of training toward a goal is the key to huge gains. She puts it better than I could: “training is this journey into the deeper parts of yourself as Read more…